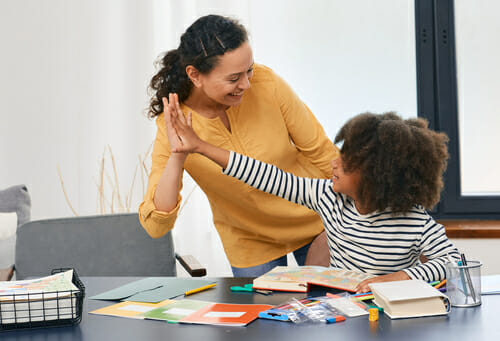 A common therapeutic technique used in behavior modification is applied behavior analysis, or ABA. Applied behavior analysis techniques have been proven particularly effective in those diagnosed with autism and similar developmental disorders. The behavior management plan is based upon making changes to the environment in a way that significantly impacts an individual’s behavior, with the end goal of the ABA curriculum being to produce positive actions and reduce negative ones.

It’s important to analyze behaviors as they occur in order to identify the antecedent, which is what comes before the behavior; the behavior itself; and the consequence, which is the positive or negative response to the given behavior. Every behavior is either reinforced or discouraged by what comes directly after it. For example, if someone feels hungry (antecedent), they might eat a snack (behavior). After this behavior, they feel less hungry (consequence). The behavior earned the desired result. This makes them more likely to repeat this behavior in the future. This is the case with anyone and any behavior. With ABA, though, the goal is to change negative behaviors for specific people. Essentially, an applied behavior analyst is noticing what the consequence of a negative behavior is and changing the consequence to make the behavior less likely to happen again. Antecedent – behavior – consequence is known as the ABC model of behavior modification, or behavior management planning.

For example, Jill has a habit of throwing a tantrum when she wants a snack. Her mother usually gives her the snack just to get some peace and quiet. The antecedent would be that Jill wants a snack. The behavior is throwing a tantrum. The consequence is a snack. This makes Jill much more likely to repeat the behavior in the future. The behavior analyst observes this about Jill and her mother, and notes it down. Then she makes a plan for how to go forward with Jill. If tantrums are successful whenever Jill tries them, she will have no motivation to stop throwing tantrums. The behavior analyst will need to change the consequence, which will lead to a change of behavior, if all goes well.

Applied behavior analysis techniques are best known for helping those with autism, which is a developmental disorder that shows itself through difficulty with social skills, as well as through repetitive and sometimes self-harmful behaviors. For example, those with autism may have trouble maintaining eye contact or learning traditional forms of greeting. Children with autism may also have habits such as rocking or tapping, or negative behaviors such as head-banging or scratching. Autism often comes with a very literal, sometimes rigid way of seeing the world. Those on the autism spectrum have varying levels of intelligence; some are below average, while others are considered average. Some autistic individuals are known as savants, because they are unusually gifted in a certain area. These skills may be remarkable either in comparison to their social skills or in comparison to the rest of the population.

ABA is also known to be effective for those with attention deficit hyperactivity disorder, or ADHD. ADHD, according to psychiatry.org, often manifests itself in an inability to stay focused, or inattention; excess movement that is inappropriate for the setting the person is in, or hyperactivity; and acting quickly without thinking, or impulsivity. Children with ADHD are often given medication to help with these issues; however, behavioral therapy can help reduce how much medication they need to take. ABA can help children with ADHD control their behavior. It can also help teachers or parents learn how to more effectively react to disruptive behavior so that the behavior begins to change and become more fitting for the situation.

An ABA behavioral management plan can also help those suffering from other issues, such as obsessive compulsive disorder, or OCD. Obsessive compulsive disorder is a condition in which the patient suffers from unwanted, intrusive thoughts (obsessions) and tries to get rid of them with certain repetitive behaviors (compulsions.) The thoughts are often very disturbing, unwanted thoughts, and the repetitive behaviors are also upsetting because they take up time and the patient often feels that he or she cannot stop doing them or something terrible will happen. OCD occurs separately from ASD, but it also occurs in those on the autism spectrum. According to Scottsdale Children’s Institute, ABA teaching strategies for those with OCD work by closely observing the patient to understand what stimulus is responsible for triggering compulsive behaviors. Applied behavior analysis for those with obsessive compulsive disorder works by helping the child with OCD, but it also can be used to help train parents, teachers, and other caregivers to respond more effectively to the situations that arise. The patient with OCD can learn to identify potential triggers and start to understand how to modify their behavior.

There are a few specific components that are crucial to a quality ABA program. Let’s take a look at those.

Task analysis is the process of analyzing components in a task or antecedent in order to focus on each part through further behavioral strategies. Breaking an antecedent down into its parts makes any weak links easier to identify so that each specific behavior can be addressed in a proactive manner. In other words, the behavior analyst must seek to understand the situation and the child, as well as what is causing certain behaviors, in order to form a behavior management plan and ABA goals.

For example, six-year-old Adam needs to learn how to wash his hands. He knows how to turn on the sink, but doesn’t know what to do after that. The behavior analyst might observe him trying to wash his hands, or she might talk to his parents about it. Once the behavior analyst has observed the situation and collected information about it, she will make a plan and separate the different parts of what needs to be learned, which is known as chaining (described below). The behavior analyst will identify which things need to be worked on. In our example, Adam knows how to turn the sink on and off, so this will not need as much work. However, other components, like using soap, washing his hands for long enough, and drying his hands afterwards, will need to be worked on.

Chaining is when the skill that is being learned is broken down into its smaller parts, allowing for ease of understanding and learning. This component of applied behavioral analysis can be applied to nearly any new skill. For instance, rather than instruct a child to clean his room, it would be more beneficial to break the process down to its parts. You could first teach him how to make his bed. Once that skill is mastered, move on to straightening clutter, vacuuming the floor, and so on.

For most people, washing their hands is not a challenging task, or even one that requires much thought or effort. For Adam, though, the process of washing his hands seems daunting. Many people do it so fast that it is hard to know where to begin. This is where chaining comes in. The process of washing hands is taken slowly, one step at a time, so that it is not difficult to perform or remember. Steps for washing hands, taken from Regis College’s website, are:

Prompting uses guidance and support to give individuals a nudge or a reminder when they are struggling to demonstrate a newly-learned skill. A prompt helps to keep them on track or to avert a misstep. This technique can help to lessen “failures” or “meltdowns”, increasing self-esteem and leading to a positive outcome.

In our example, Adam and the behavior therapist are working on washing hands. Adam has turned on the water, gotten his hands thoroughly wet, applied soap to his hands, and scrubbed his hands for 20 seconds. Now Adam is standing in front of the sink, wondering what to do next. His hands are covered in soap and he is not sure how to get rid of it or what the next step should be. The behavior analyst had explained it and they have gone through it before, but it is a lot to remember for Adam. He looks at his soapy hands and almost feels like crying. Then the behavior therapist gently steers his arm towards the water. Adam remembers – the next step is to rinse his hands. He rinses off his hands carefully and then turns off the water. Now his hands are all wet, and he stands with water dripping off of them onto the floor. The behavior therapist pulls a little on the towel. Adam remembers the last step and happily dries his hands. The therapist gives him a high five and congratulates him.

However, it’s important that clients not become entirely dependent upon prompting, when it comes to a behavior management plan or ABA teaching strategies. You ultimately want them to feel secure in completing skills on their own without assistance. That’s where fading comes in. This term refers to the process of gradually removing prompts until the individual can confidently perform an activity without them.

Adam has been washing his hands almost on his own for a little while now. He has successfully gone through almost all of the process on his own; however, he has still needed some prompting. This time, he has gone through most of the process, right up to rinsing the soap off his hands. He leaves the water running and pulls his hands away, thinking. There is something missing, he just can’t remember what. His hands are dripping on the floor. He looks at the behavior analyst, thinking she will show him what to do next. She doesn’t help him this time, though, and he thinks very hard. Finally he remembers – he has to turn off the sink! That still leaves his hands wet, though. After a moment, he remembers that he has to use the towel. He dries his hands, and the therapist gives him a high-five. He has washed his hands all by himself.

Shaping is giving a form of positive reinforcement when clients demonstrate positive attempts or success at performing a newly learned skill while they undergo a behavioral management plan. The important part to remember with shaping is that improvement must be consistently shown in order for the reinforcement to be given. A consistent level of performance would not receive positive acknowledgement, only regular improvement. The reasoning is that this type of positive reinforcement strategically encourages the individual to work toward mastery of a skill.

All throughout the behavioral management plan, Adam’s behavior analyst has been giving him positive reinforcement when he made improvements. Sometimes she verbally congratulated him. Other times, she gave him a high five. Sometimes, there was even a snack or a toy. All of these things made Adam want to keep learning how to wash his hands all by himself. 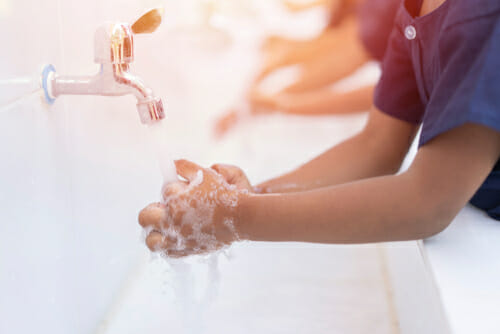 Now that Adam has learned to wash his hands, the behavior analyst will repeat the steps with another activity. To begin with, she will determine what Adam needs to learn. She might decide that brushing his teeth on his own is an important step. Once she has decided this, she will evaluate his current skills in the area of brushing his teeth. Next, she will break tooth-brushing into small, manageable steps, such as picking up the toothbrush, turning on the tap, washing and rinsing the toothbrush, turning off the water, picking up the toothpaste tube, removing the cap from the tube, and so on. Component analysis ABA is the process of specifically examining which part of a treatment was successful; component analysis ABA usually takes place after the treatment in order to determine the future direction of ABA goals or an ABA curriculum.

This concludes our article on the five components of ABA.