Home » Frequently Asked Questions About ABA » What is the Difference Between an ABA and a BCBA?

What is the Difference Between an ABA and a BCBA? 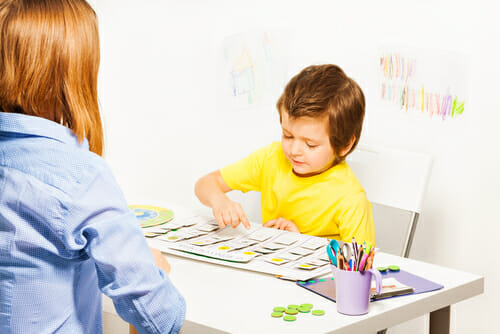 Despite both having to do with applied behavior analysis and treating autism, social, developmental, and behavioral disorders, there are several differences between an ABA and a BCBA. These differences go beyond just the name and the degree required for each. The Applied Behavior Analysis (ABA) therapist works with patients in need of applied behavior analysis therapy, but typically works under the supervision of the Board Certified Behavior Analyst (BCBA). ABA therapists typically have a bachelor’s degree and are also known as BCaBA, or Board Certified Assistant Behavior Analysts. BCBA therapists usually have a master’s degree in order to be certified by the BACB. They are two separate professionals who are working for the same goal. Do you wonder what is ABA degree compared with BCBA, or what is a BCBA as compared to what is an ABA? Read on to find out more about what is BCBA therapy, and the ABA BCBA difference.

What is Autism Spectrum Disorder (ASD)?

ABAs and BCBAs commonly use applied behavior analysis to work with students with autism spectrum disorder (ASD). The core symptoms of this disorder, according to autismspeaks.org, are “social communication challenges and restricted, repetitive behavior.” Some symptoms that can be seen when the child is very young include repetitive behavior, a lack of babbling as a baby, and less responsiveness to their name. Many people with ASD are not diagnosed until they are older, and therefore cannot benefit from applied behavior analysis or other therapy until then.

Regardless of age, ASD patients often struggle with communication. They may have difficulty recognizing when an expression is not meant to be taken literally, and they may misuse eye contact or tone of voice. They might struggle with verbal communication – according to the website, about one in three ASD patients are nonverbal. They may also struggle with recognizing emotions in others, dealing with their own emotions, taking turns in conversation, and following social norms like personal space. Repetitive behavior is also a symptom of ASD. Repetitive motions, staring at lights or spinning objects, and resistance to change in routine are all common behaviors. In addition, ASD patients often have a deep and specific interest in a particular subject.

There are many misconceptions about autism, according to an author at researchautism.com in an article entitled “Ten Things Autism Isn’t.” The author says that many people see autism simply as social awkwardness, but it goes deeper than that. People often also think that people with autism never grow up; however, says the author, this is not at all the case. Autism, she says, is neither terrible nor wonderful. It is simply another way of seeing the world. It is important that applied behavior analysis professionals understand this as they practice behavior analysis.

In the case of children with autism, however, there are basic skills that may need to be learned, depending on the child. People with ASD often simply need guidance to reach their potential. This is where people with an ABA degree and BCBA therapy professionals come into the picture.

Who else do ABA and BCBA professionals work with?

ABA and BCBA professionals do not only work with autistic patients. They also may work with people with attention deficit hyperactivity disorder (ADHD), according to this article, since behavior analysis can be useful for multiple issues. The ABA therapist could help the child learn to control their impulses by focusing on what they are doing.

ABA or BCBA therapists also might use behavior analysis to work with those struggling with obsessive-compulsive disorder (OCD). Applied behavior analysis professionals can help them understand that bad things will not necessarily come from disorder.

Post-traumatic stress disorder patients can also be helped by BCBA or ABA therapists. The applied behavior analysis therapist will help the patient by triggering the unpleasant memories that they struggle with, but in a way that can be controlled. This way, the patient can learn to deal with the memories and react in an appropriate way.

ABA and BCBA professionals do not usually differ in the kinds of people they interact with, but in the ways that they interact with them and use behavior analysis to help them. BCBAs usually make the goals, while ABA therapists often help patients to realize those goals.

What is an ABA Therapist?

One of the ways that someone with an applied behavior analysis degree can help students with ASD is by increasing language and communication skills. ASD patients often have language development issues, according to this article from appliedbehavioranalysisedu.org. The challenge for applied behavior analysis, says the article, is that it can be difficult to tell when a language development issue is the result of a speech impediment and when it is due to a behavioral issue.

For example, an autistic child may have difficulty progessing because of their behavior. They may also begin “acting out” because of their frustration at their lack of communication skills. Behavior can be the cause of language issues; however, language issues can be the root cause of undesirable behavior. It can be difficult to tell which came first. This is part of the job of a therapist with an ABA degree.

According to marcus.org, ABA therapists often use applied behavior analysis to help with problematic behaviors that autistic children struggle with. These could include aggression, such as scratching, biting, or hitting others; self-harm; tantrums; screaming; or wandering off. This can, according to the article, make even very ordinary tasks highly difficult. A trip to the store can be very hard on the parent if the child often exhibits these behaviors. ABA therapists help the child overcome these behaviors in four ways.

The first way is by rewarding the behaviors that are desirable. Another way that ABA therapists help is by not giving in to undesirable behaviors and giving a child what they want. For example, if a child is screaming because they want a particular snack, it is important not to give it to them. Otherwise, they may begin to believe that this is an effective and desirable way of getting what they want. A third way that ABA therapists work with the child is by using visuals to communicate rules. If the child is nonverbal, it can be difficult to help them understand what is expected. Using visual signals is one way to overcome this difficulty.

How Does the Applied Behavior Analysis Process Work?

Generally, the therapist starts with achievable goals in the applied behavior analysis process. Starting with small goals allows the children to reach success earlier, which leads to more motivation and more success later on. For example, for a child who has difficulty waiting for a snack, the therapist will begin with the goal of having them wait for five seconds the first time, giving the child a high likelihood of success. If this goal is met successfully, the child will wait a little longer the next time, thus progressing to a place where waiting is no longer such a great struggle.

A therapist with an ABA degree also generally works with one child or client at a time so they can provide the patient with one-on-one treatment. However, it may be benificial to the child to also work with them in settings where they will interact with others, particularly as interaction with others can be something that autistic children struggle with.

An ABA therapist works with and assists a BCBA, but they are generally under the supervision of the BCBA. ABA therapists typically spend more time actually working with a client in the day-to-day learning process. Although many ABA therapists have a master’s degree, some are hired with a bachelor’s degree in psychology or a related field. ABA therapists may work in a medical office setting, but they may also travel to the client’s home or workplace to provide therapy.

What is a BCBA Therapist?

Some of the tips given in the article include choosing a school with a high BCBA pass rate, working closely with colleagues and professors, and graduating with a master’s degree in a timely manner so that the standards do not change while the applied behavior analysis student is still preparing to take the exam. Certification and licensure requirements vary from state to state. Like ABA therapists, Board Certified Behavior Analysts work a lot with autistic patients but are not exclusive to autism. For a BCBA, autism is often an issue to evaluate.

Usually, according to autismspeaks.org, the BCBA is responsible for evaluating a client and creating goals related to applied behavior analysis. These depend on the client’s age, but may include social skills, self-care, motor skills, and academic skills. The BCBA is often the supervisor for the ABA. The BCBA takes into account the client’s age, interests, skills, and family situation in order to customize the program. They may determine what systems or methods should be used with each particular learner and what the learner needs to work on next.

To work as a BCBA, the candidate must have at least a master’s degree, pass state certification exams, and maintain the certification by completing continuing education courses or workshops. They must also meet the code of ethics requirements set by the Behavior Analyst Certification Board. Board Certified Behavior Analysts who want to take their education to the highest level often earn a doctoral degree. Some earn a post-doctoral certification in behavioral psychology through the American Psychological Association.

Another thing that Applied Behavior Analysis therapists and Board Certified Behavior Analysts have in common is that they are both very much in demand. The area of substance abuse, behavioral disorder, and mental health counseling is growing. In fact, the U.S. Bureau of Labor Statistics predicted that the field of substance abuse, behavioral disorder, and mental health counseling should see a job growth of 25 percent between 2019 and 2029, which is much faster than average. The median annual pay for 2020 was $47,660; although this was for the broad areas listed above, it gives a general idea of what can be expected. This works out to $22.91 per hour. Although those with an ABA degree and BCBAs can both expect positive career growth, the demand is highest for those that are board-certified and have a master’s degree.

California, Pennsylvania, New York, Florida, and Massachusetts were the states in which the most substance abuse, behavioral disorder, and mental health counselors were employed, which includes board certified behavior analysts. Nevada, Utah, Alaska, New Jersey, and Oregon were the top-paying states for these professionals in 2020. The New York, New Jersey, and Philadelphia area was the metropolitan area where these counselors were most in demand.

Working as a behavior analyst can be as rewarding as it is challenging. If you would rather work on the day-to-day process of learning with individuals or if you prefer not to go through the process of becoming BCBA certified, an ABA degree and career may be for you.

If you prefer making plans and goals and are interested in continuing on and learning more in order to be BCBA-certified, you may want to consider a career as a BCBA and go deeper into the field of what is BCBA therapy. Once you, if you are interested in this career, learn the differences between a BCBA vs ABA, and what is a BCBA therapist, you can research the licensure requirements in your state and be on your way toward a fulfilling career in the field of applied behavior analysis.

This concludes our article on the differences between ABAs and BCBAs in the field of applied behavior analysis.