Home » Frequently Asked Questions About ABA » What is the Difference Between a BCBA and an LBA?

What is the Difference Between a BCBA and an LBA? 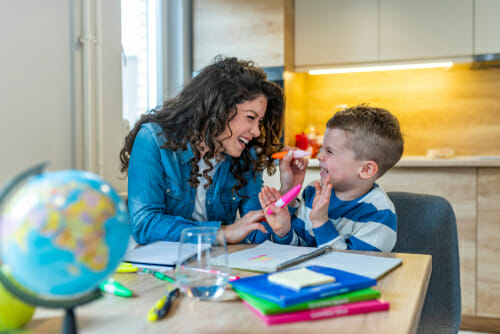 What is the difference between a Board Certified Behavior Analyst (BCBA) and a Licensed Behavior Analyst (LBA)? This is a question that has gained relevance during the last couple of decades. The basic difference is in whether they are regulated by states, not in what their training is or what they do. Both are applied behavior analysis professionals that have fulfilled a set of requirements, whether those requirements were put in place by the state in which they practice or by the Behavior Analysis Certification Board. It can be difficult to navigate the difference between what is an LBA and what BCBA stands for. Below, we attempt to clear up some of the BCBA LBA differences, as well as addressing LABA certification and the idea of an LBA degree.

Applied behavior analysis is the study of behavior used to make changes for the better in people’s lives. It is often used for those diagnosed with autism spectrum disorder (ASD) but has also, in more recent years, been shown to be effective in treating other issues, such as attention deficit hyperactivity disorder (ADHD), post traumatic stress disorder (PTSD), obsessive compulsive disorder (OCD), and other behavioral issues. Due to the recent interest in ABA as a treatment for these issues, people have been wondering about BCBA meanings, as well as about LBA meanings.

Applied behavior analysis was developed in the 1960s and 70s by Ivaar Lovaas and Robert Koegel. Ivaar Lovaas conducted research, and he was a pioneer of the idea that children who were born with certain weaknesses were not “hopeless cases;” rather, they could be worked with and their behavior could be improved. He conducted research with young autistic children who had such severe behavioral issues that their parents had given up on improving them, described in the 1965 article, “Screams, Slaps and Love.” At the time, there was no such thing as a reliable treatment for problems like autism. However, Lovaas took on the task of teaching four of these children. He employed methods that might be considered less acceptable today – the method, at the time, involved a great deal of negative stimulus, which could include speaking sternly, or, in Lovaas’s case, shouting at or even slapping the child in a calculated show of authority. Alternately, when the child improved and began to demonstrate acceptable behaviors, there would be rewards, both in the form of food and verbal praise.

With these very distinct and opposite reactions, the autistic children Lovaas worked with began to show signs of progress in a way that their parents had not thought would ever be possible. The 1965 article mentioned above sparked a great deal of controversy because of the negative stimulus techniques used. However, the fact remained that the new way of changing children’s behavior was successful in a way that no other technique had been. Once Lovaas had developed this new method, his student, Robert Koegel, continued to research, write, and speak on the topic, helping applied behavior analysis to become more well known. The term “applied behavior analysis,” according to this article from Discover Hope: Behavioral Solutions Inc., was first used in 1968 in the Journal of Applied Behavioral Analysis, which is still an important resource for applied behavior analysts today.

How Does Applied Behavior Analysis Work?

An example of an antecedent, a behavior, and a consequence is this; there is a child who has a habit of throwing a temper tantrum whenever she wants a snack, and her parents always give in and give her a snack. The antecedent, in this case, is the child’s desire for a snack. The behavior is throwing a temper tantrum. The consequence has always been that her parents give her the snack, which makes her far more likely to repeat the behavior in the future. In this example, the behavior analyst would simply need to change the consequence by not giving the child the snack. This would make the child much less likely to repeat the behavior in the future, since it was not effective in getting her what she wanted. This is how the antecedent-behavior-consequence method of understanding behavior can be applied in the real world.

Why Would Regulations be Necessary to Govern Behavior Analysts?

Once applied behavior analysis became a field in its own right, the question became whether it should be regulated. Especially once positive reinforcement largely replaced negative stimulus, the greatest concern was that those unaware of new techniques would muddy the results of this revolution in treatment. It might also be difficult for patients, or for the parents or caretakers of patients, to tell the difference between well-trained behavior analysts and those who were ill-prepared for the job or who pretended to be well-meaning and were not. Also, there was some concern that older negative stimulus techniques were, in fact, harmful to the children they were used on, and many wanted to ensure that only those techniques that used positive reinforcement would continue to be employed.

Child psychologists and behavior analysts lobbied for regulations regarding the treatment of children with behavior issues. Some would have wanted the federal government to resolve this, as this would provide a unified set of regulations for the entire nation. This would allow someone who is licenced in one state to practice in another state, for example, and it would ensure that the same standards would be set in every state. However, the 10th amendment would seem to indicate that this is not the responsibility of the federal government.

“The powers not delegated to the United States by the Constitution, nor prohibited by it to the States, are reserved to the States respectively, or to the people.”

In 2009, Nevada and Oklahoma began to regulate behavior analysis. They were following by Arizona, Missouri, Kentucky, and Wisconsin in 2010. Since then, 33 states in total have decided to require licensure. These include Kansas in 2014, Michigan in 2016, Texas in 2017, and, most recently, Indiana and North Carolina in 2021. The Behavior Analysis Certification Board website lists all states that require licensure, and it provides links to websites with more information on regulations and licensure.

LBA meaning: What is an LBA?

According to the New York State Association for Behavior Analysis, there have been issues with the way that some states have handled this. New York has been especially restrictive for behavior analysts. The LBA certification, or technically the LBA licensure, is overseen by the New York State (NYS) Office of Professions. To become a NYLBA, the state requires an abundance of specific coursework and an internship of no less than 1500 hours with supervisory oversight. The applicant must pass both the NYLBA exam and the autism exam to enter private practice. Even then, the LBA is only eligible to work with children with behavior issues in New York and, of particular importance, only with children whose problems are related to autism, according to this article from the New York State Association for Behavior Analysis. There are many other problems that benefit from the care of an applied behavior analyst, but in New York, behavior analysts may not work with people who have problems other than autism. Those with ADHD (attention deficit hyperactivity disorder), learning disabilities or difficulties, down syndrome, substance abuse, or behavioral challenges have been shown to benefit from applied behavior analysis. However, behavior analysts are not currently permitted to offer that care in the state of New York. According to the New York State Association for Behavior Analysis, there is legislation being promoted that may solve this issue, allowing behavior analysts to work with individuals that have behavior issues that do not stem from autism. New York currently has a disproportionately low number of behavior analysts because of the complicated restrictions; however, if these restrictions are lifted or made easier to navigate, it is possible that more behavior analysts will plan to practice in New York.

BCBA Meaning: What is a BCBA?

There are pros and cons to regulation by the government and to allowing another organization, such as the BACB, to certify professional behavior analysts.

One advantage to having a certifying body such as the BACB is that while state governments have much to concern themselves with, the BACB has only one thing that it does: certifying behavior analysts. This may cause the quality of certification to go up. A disadvantage, however, is that the BACB does not enforce its certification. That is to say, in a state not regulated by legislature on behavior analysis, someone can practice behavior analysis without being certified at all, and the BACB does not stop them from doing this. The BACB leaves the choice up to individuals to seek out a BCBA meaning a board certified behavior analyst; this is what BCBA stands for.

Regardless of whether regulation by the state or certification by another organization is preferable, the current system is a mix of both, and it presents its own set of challenges. For example, in states that regulate behavior analysis, it can be difficult to navigate the ins and outs of regulations. In some cases, such as in Texas, the requirement for licensure is simply to be a BCBA and to apply for licensure. This is the situation in quite a few states. However, in other states, such as New York, being a BCBA is not enough, and would-be behavior analysts must go through a different process to become licensed.

This concludes our article on BCBA LBA differences and the licensed behavior analyst vs BCBA.