Home » Frequently Asked Questions About ABA » Discrete Trial Training: What Is It?

Discrete Trial Training: What Is It? 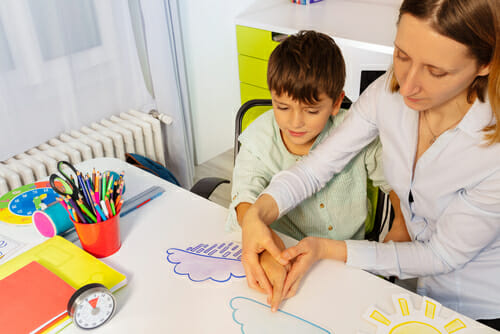 Discrete Trial Training Definition: What is DTT in ABA?

Applied behavior analysis is using the study of behavior to change people’s behavior in a positive way. It uses a number of different techniques to change behavior. It is most often associated with autism, as it can be helpful for those on the spectrum, but it is also used to help people who have other conditions, such as PTSD, OCD, or addiction problems. It can also be used for those who don’t suffer from any of these conditions but who want to improve their behavior with the help of a life coach who is knowledgeable about applied behavior analysis.

What is the difference between discrete trial training and other kinds of ABA?

The main difference is that discrete trials are more structured. The main idea is to avoid overwhelming the patient, so trainers are careful to teach one element at a time. With other methods, trainers try to use the patient’s natural impulses, integrating play into the training time. For example, with the Early Start Denver Method, which is most effective for very young children, trainers base their training on an understanding of the development of a young child, and they try to base the behavioral changes on relationships. In Pivotal Response Treatment, trainers also focus on play. PRT especially focuses on certain pivotal areas, such as motivation, self-management, and initiation of social interactions (autismspeaks.org.)

There is controversy over which method is the most beneficial. Those who believe that play-based learning is best protest against the idea of a child having to learn in an empty room, learning by rote instead of interacting with others or learning through play. However, proponents of discrete trial teaching say that for some children, it is impossible to learn if there are distractions. For these children, a room with toys and other children in it would be too distracting, and they would be unable to concentrate. This debate has not been settled, except to say that some children learn best without distractions, while others need more variety. Therefore, the kind of ABA that will be most effective usually depends on the needs of each child. For some, distraction-free discrete trial teaching is better. For others, a more play-based method works well.

How are these methods similar? 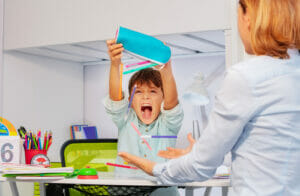 All of these methods are ABA methods, but they are very different. However, all of them rely on the antecedent-behavior-consequence pattern. An antecedent is what comes directly before a behavior. The behavior is often what the trainer is trying to change. Following the behavior is the consequence. The consequence is very important, because what happens directly after a behavior often determines whether it will be repeated. For example, a child wants a snack (antecedent). He starts to yell and scream (behavior). Someone gives him the snack (consequence). In the future, the child is more likely to yell and scream to get a snack because this was a successful way of getting a snack. However, if the child’s behavior has a different consequence, he may change his behavior. For example, the child wants a snack (antecedent). He starts to yell and scream (behavior). The child does not get a snack (consequence). It is now less likely that the child will yell and scream next time he wants a snack. The next task is to teach the child a more positive way of asking for what he wants.

What is DTT? How was it developed?

Carautismroadmap.org states that Ivar Lovaas (1927-2010), a Norwegian psychologist, developed this method of behavior analysis. Lovaas grew up under the Nazi occupation of Norway, and this experience shaped the rest of his life. He earned a violin scholarship and studied at Luther College in Iowa; in 1951, he graduated with a Bachelor of Arts in social studies. In 1954, he earned his master’s in psychology; in 1958, he completed his PhD in learning and clinical psychology. He interacted with the leading behavior analysts of the time; however, it took some time for him to become a behavior analyst in his own right, according to this article from www.ncbi.nlm.nih.gov. He wrote and researched extensively on the subject of behavior analysis.

He also researched aversive training – that is, training that uses punishment. This was highly controversial at the time. An article from Life magazine entitled, “Screams, Slaps and Love” described the applied behavior analysis practices of the time. In the aversive part of the training, Lovaas would use very extreme reactions, depending on the child’s behavior. When the child misbehaved, the therapist would sometimes scold harshly and, in some cases, he would either slap or mildly shock the child. When the child behaved well, there would be hugs, affection, and food. When the article came out, Lovaas’ method of applied behavior analysis was very controversial. However, at the time, many parents saw this method as a way out of a situation they had not thought there could be a way out of. The article describes the story of Billy, an intelligent autistic child who was vicious towards his mother when his father was not home and enjoyed upsetting her, as well as throwing 10-minute tantrums regularly. Many people had told the parents that their only option was to have him institutionalized, but they were unwilling. However, they were willing to try Lovaas’ experiment. Billy persisted with his tantrums for some time and had difficulty interacting with other children; however, over time, he began to learn more acceptable behaviors. His mother was very happy and relieved at the change, and at the time of the article, Lovaas planned to have Billy live at home, continuing to attend regular behavior analysis sessions. For some, the idea of punishing autistic children for their misbehavior was seen as inhumane. For others, this was seen as the only way to make progress with children whose parents had given up hope of ever teaching them more acceptable behaviors.

Furthermore, as the www.ncbi.nlm.nih.gov article states, Lovaas’ work only used a small amount of aversive training. As is the case with many controversies, the most negative or aversive moments from the journalist’s visit were chosen to be part of the article. In 1978, Bernard Rimland wrote, “Like all behavior modification programs, his was 98% positive reinforcement, with only a trace of aversive control.” Many parents of autistic children maintained that Lovaas’ method was a good one, but the controversy remained.

Aversive training is still used today, though rarely with children. However, Lovaas’ main contribution that is in use now is discrete trial training, the practice of teaching one concept at a time.

What are the steps in ABA discrete trial training? 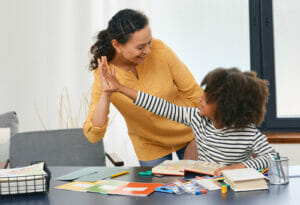 Step one: The first step is to develop a plan. This usually involves meeting with the parents of the child involved. Occasionally, the therapist will meet with teachers if this method is to be used in the classroom.

Step two: The second step is to create a series of steps for this plan. To use the above example, if the plan is that a child is going to learn colors, the steps might be:

Step three: The third important component of discrete trial training ABA is the use of prompts. The therapist might say something like, “Point to red.” If the child doesn’t understand, the therapist might move the child’s hand for him.

Step four: Keeping data is the fourth step, in which the therapist writes down the child’s response to each prompt. This will help when it is time to develop another plan.

Step five: After the child is successful, it is important for the therapist to provide reinforcement, the fifth step. An encouraging, happy reaction might be all the reward the child needs, or the therapist may give a snack or a favorite toy as a reward.

Step six: Repetition and mastery, step six, ensures that the child can repeat the skill on his own.

Step seven: In the final step, generalization, the therapist introduces the child to different situations involving the new skill, and rewards him for continuing to do it correctly despite other factors changing.

Who are the trainers in discrete trial training?

RBT is a behavior-analysis paraprofessional certification. Registered behavioral technicians must complete a 40-hour training course, pass a background check, and pass the RBT exam. Once certified, they work under the guidance of a BCBA (Board-Certified Behavior Analyst) or a BCaBA (Board-Certified Assistant Behavior Analyst). They must renew their certification every year. Duties include helping patients develop social skills, reducing certain behaviors, and reporting and documentation. These behavior analysts may use DTT ABA methods.

ABA professionals who have earned an undergraduate degree and are board certified are known as BCaBAs (Board-Certified Assistant Behavior Analysts). They are not allowed to work without the supervision of a BCBA, but they are allowed to supervise an RBT. They must have completed an undergraduate degree, which must have included applied behavior analysis coursework, and a supervised experience. After this, they must apply to, take, and pass the BCaBA exam. Once they have taken and passed this exam and are working as a BCaBA, they must maintain their status by adhering to ethics standards, meeting continuing education requirements, receiving ongoing supervision, and re-certifying every two years.

BCBA is a master’s-level certification. BCBAs (Board-Certified Behavior Analysts) are qualified to practice independently. Much like BCaBAs, BCBAs must meet continuing education requirements and ethics standards once they are certified, as well as re-certifying every two years. The graduate certification puts the behavior analyst in a much more supervisory role. This often means that he or she will be observing patients and making plans. The plans may then be carried out either by the BCBA or by an RBT or BCaBA working under the supervision and guidance of the BCBA.

This is a doctoral-level certification that those with a PhD in behavior analysis may pursue. However, this designation does not grant any further privileges to the behavior analyst. The behavior analyst will continue to function in the same way as they did prior to earning this designation, and they will need to meet requirements for education and re-certification in the same way as a BCBA. The one exception might be that if a BCBA-D and BCBA are working at the same practice, the BCBA-D, since he or she has more education than the BCBA, might have a higher authority and be in a more supervisory role.

This concludes our article on discrete trial training.